Throwing a first pitch and appearing on a baseball card : an insider's look and an interview

In my life, I was lucky enough to befriend some of my favorite artists. I'm no celebrity or anything, but I suppose I go around the right circles and what can I say, I'm just a nice, lovable guy. Who wouldn't want to be friends with me ?

An artist I loved listening to at the end of the 90s was Buck 65. For some reason, his lyrics really appealed to me, along with his sense of melody (and sampling, at the time). The more I'd listen to his songs, the more I'd realize what a great songwriter he was. Turns out he's also an amazing guy in real life (he spent a couple of years in France so we got to hang out quite a lot, including to try and play catch in front of French people who had no idea what those gloves are for, and why we weren't kicking the ball), and an incredible storyteller. His first book is due out real soon, and I can't wait to read it, of course.

Like I wrote yesterday, I was thrilled to hear he would be part of this year's Allen & Ginter set. That's because I'm a good friend : I'm not jealous (ok, maybe a little), just happy for him. Rich is the reason why I came back to the hobby, and he's the one who first told me about A&G and Archives and Heritage and the thrill of collecting vintage cards. I remember the long talks we'd have about baseball, and one of his favorite topics was to try and understand why on earth Tim Raines was so underrated (and that's a darn good question).

I hope to be able to go and spend some time with him in Toronto, where he lives now, so we can catch a few Blue Jays games, and so that he can show me his local card shop.

In the meantime, I thought it'd be interesting for everyone to have an insider's view and first hand experience of what it is like to be a cardboard hero (thanks Matt for the nudge in that direction). And it's not every day you find a Don Mossi card collector who trades with lesbian former nuns... 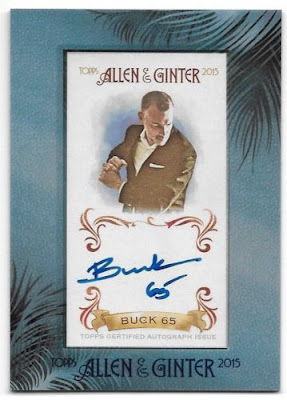 - On the Allen & Ginter checklist, they write that you are a musician. That is vague to say the least, and some collectors may not be familiar with your music. How would you define yourlsef as an artist ?

Well, my musical roots are definitely in hip hop. And I make all parts of the music myself - a make the beats, I do the turntable stuff (scratches) and the vocals. But my musical tastes are very broad and that's reflected in the music. If you listen to a few songs, you'll hear influences from everyone from Woody Guthrie to Black Sabbath.

- Unlike most non-athletes featured in the set, your particularity is that you are a real baseball aficionado. How did you come to love the game ? Did you play at a high level ?

I started playing when I was seven years old and for whatever reason, I was good right away. Being good fed my ego, so I ran with it. I reached my peak in my late teens, I guess. I attended a baseball school every summer and there I was given a serious look by a scout who worked in the Yankees organization. He said he plans for me, but he took a heart attack before we had a chance to get anywhere. He told me I was going to be a star and I think I probably would have been. I was a power-hitting shortstop.

- You live in Toronto, does it mean that you attend a lot of Blue Jays games ? What players on the team have you enjoyed watching the most in the last few years, and what teams or players do you follow besides Blue Jays ?

I usually go see at least one Jays game every home stand. I love watching Josh Donaldson. He's one of my top-three favorite players. It's been fun watching Encarnacion crush baseballs. And a few years back, I loved watching Scott Rolen play third base. As an Expos fan, I follow the Nats. I'm a Dodgers fan. And I have connections with the Cubs, so I feel kind of invested in how they're doing.

- Who was your favorite player growing up ?

- You threw out the first pitch at a Dodgers - Cubs game last year. Tell us more about that unique experience.

A friend of mine is an executive in the Cubs organization. She gave me the opportunity. It was a big, big deal for me. It felt like my whole life lead to that moment. I tried to take my time to soak it all in. But in video I've seen of the pitch, it really looks like I rush through it. Luis Valbuena caught my pitch. I threw it pretty hard - probably between 65 and 70 mph. It was a strike. After he caught it, Valbuena came out and put his arm around me and said, 'wow, that was really good!'. It was an amazing feeling.

- Back to cards. I know you're a collector (after all, you made me want to come back to the hobby), but what exactly do you collect ? Are you a team, player or set collector ? What is your most prized item in your collection ?

I do a bit of both. I have a lot of complete sets from between the late 70s and mid 80s - nothing too valuable. And I collect cards of specific players. I collect cards of my favorite players - Gary Carter, Ted Williams, Eddie Matthews, a few others. But I also collect cards of players I think are/were interesting for whatever reason. So I collect cards for Wally Moon and Don Mossi and Dock Ellis and Jimmy Piersall. The prize of my collection is a T206 Rube Waddell.

- What are your thoughts about the evolution of the hobby ?

I started collecting when I was a kid - around 1981 or so. My dad sold cards at his gas station. I bought most of them with lawn mowing money. I also used to trade cards with a lesbian couple, both of whom used to be nuns. I stopped collecting sometime in the late 80s or early 90s because I didn't like the direction things were going in. But I started again seven or eight years ago. There are still some things about the hobby that drive me crazy. Topps is really good at creating hysteria. But the product looks so good these days - well, most of it. There's some incredibly ugly cards being made, but some very beautiful ones too.

- Where do you buy and choose your cards ? Are there still Card Shops to be found in Toronto ?

I buy things off eBay once in a while. But there's a really great shop here in Toronto that I visit regularly. I've become friends with the guys who run it and work there, so they look out for me. They have a really good mix of new and old stuff and they're not super-picked-over.

- Do you read any card blogs ?  Besides mine, when I write about you, that is.

I check lots of them. Yours really is great. I like quirky ones like Poor Old Baseball Cards and The Ugly Baseball Card Blog. I like Cardboard Junkie. There were some old ones I liked that don't seem to be around anymore. I use Check Out My Cards as a reference sometimes...

- So, how does one go about to try and land on a card manufactured by Topps ? I know A&G is one of your favorite sets, so it must've been quite a thrill to hear they were planning on adding you to the checklist !

Well, early this year, I heard Topps was going to be doing a set of cards featuring people who threw out first pitches at games last year. I made some calls to try to get in on that, but I was too late. However, the people I spoke to said they still needed some 'cultural figures' for the 2015 A & G set. Needless to say, I jumped at the opportunity. It worked out for me even better than I could have hoped. My card is so beautiful!

- You went to Topps HQ to sign some of the cards, how was it over there ? How many cards did you sign, and were there red ink ones ?

It was really cool to see how it all worked. The offices are nice. I was sort of surprised to see how young the staff was. And not everyone who works there seems to be a big baseball fan. I guess that's to be expected. They do a lot more than just baseball cards. Some people are just really passionate about graphic design, or whatever. I signed a big stack of minis. I did around 250 (I think) in blue ink and just a couple in red ink. There was a very specific and careful process involved. As a collector, it was pretty exciting to be doing something behind the scenes like that.

- Who selected the photo, and why that one ? It's fun and classy, I personnally think it's a great choice (and my opinion counts !)

Your opinion does count! I sent them a handful of photos to choose from - maybe four or five. I let them choose and told them I didn't want to know what they chose so it would be a surprise for me. I sent a photo from my first pitch day in Chicago. I sent one from a day at some batting cages in Philadelphia. A few others. But I really like what they chose too. It's classy!

- Does it mean you'll be collecting the set and putting your own card in your binders ? (I know I would)

I bought a box of A&G the other day and pulled one of my own cards. I put that one in a top loader. They'll be sending me a box of my card next week. I'll put one of those in a binder along with as much of the set as I can pull together. Obviously, this is one set I'd love to complete. So that will be project for the next year or two, I suppose.

- Will you be bidding on all your autos on ebay just to see their value skyrockett ? (I know I would)

You know, that's a good idea. I'd hate to see my card being sold on eBay for ten cents.

Thanks a lot, Rich, for taking the time to answer my questions. Now, I just need to convince some people at Topps to make an insert set about famous French baseball card bloggers...