There's one gift I'll want to show off, but I need to receive it first. One hint : I'm very, very excited about it !

But before that, there's our latest triple break I need to blog about, as once again Brian sent me my share of the break along with a bunch of great cards. 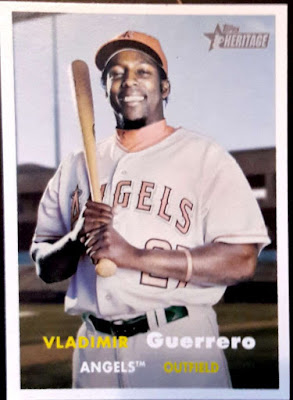 This time, Brian chose a box of 2006 Heritage. Like him, I wasn't collecting during that period, so those cards are all new to me, save for a couple of Blue Jays I already had in my collection. I really love their look and feel, and Vlad is cool on any card and design anyway. Unfortunately, there weren't any hits in the box, but hey, the base cards are still nice enough. 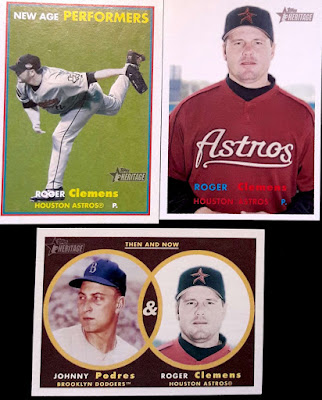 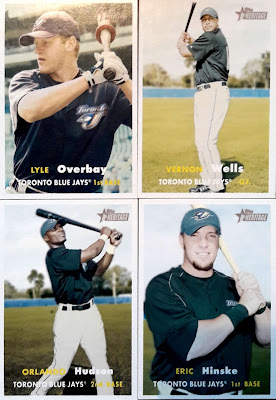 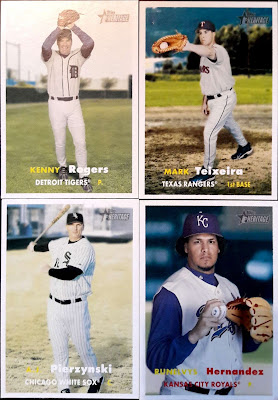 There are some really strange looking cards in the bunch...that Teixeira is actually a little creepy. 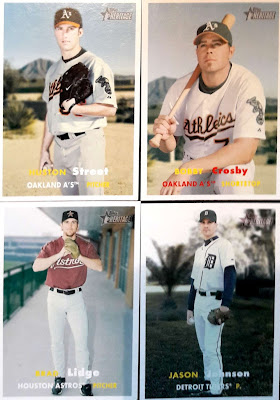 More weirdness, this time with the scenery.

And like I said, Brian always pimps his packages with awesome material for my PC : 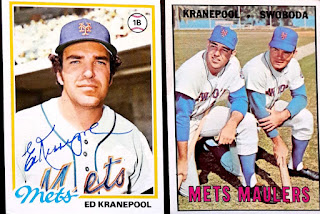 A couple Kranepools, including a signed one ! I love that 67 also 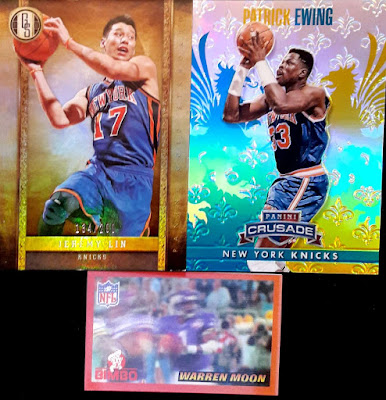 The Knicks announced today they were parting ways with Phil Jackson. That's great news for any Knicks fan, even though I have mixed feelings considering the tremendous respect I have for the guy. But I have noooo idea whatsoever what he had in mind. Beside a triangle, that is.
The Warren Moon is great, as it works like a sportsflics card, with the back written in spanish. Perfect oddball. 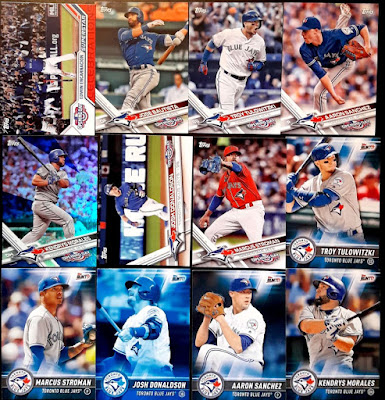 A bunch of Blue Jays from this year's batches. I'm definitely not a big fan of the 2017 topps design. I do like the OD blue parallel though (Morales shown here) 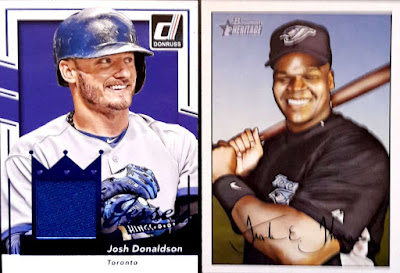 Love that Big Hurt, and it's not something you'll read often here, but that Panini Donruss looks actually pretty good. Always a treat anyway to get a Donaldson relic in a trade 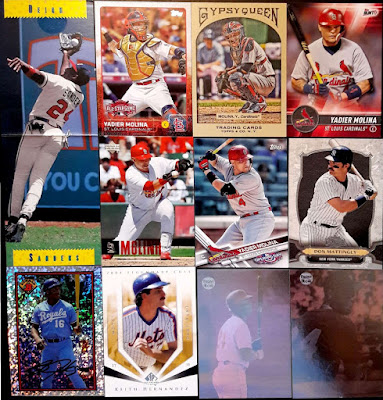 How cool a selection is that ? Amazing Deion foldout, incredible Griffey holograms/oddballs (perfect combo !), a fancy Mattingly, some Yadiers, a cool Bo. Wow ! (yes, I get very excited about base cards) 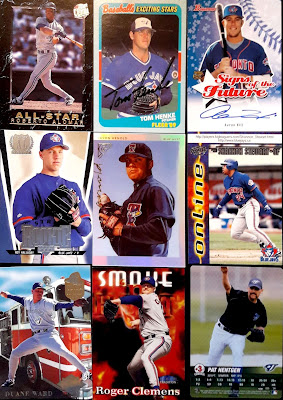 And finally, more Blue Jays goodness, including a couple of autos (woohooo), some 90s inserts (gotta love those Ultra inserts) and a nice RC of a promising pitcher

(sorry, but those who clicked wishing for a contest will be disappointed : this post is all about me)

In a few days, I hit a major personal milestone that happens to most of us : I turn forty. I figured I might as well write something now, as I have a party to plan for this week-end and some binders to put away before everybody comes to tell me how great (and old) I am.

Speaking of old, I finally decided to tackle something I've been wanted to do for a long time : put all my 93 UD in a binder, leaving empty spaces for the cards I'm missing. So I went to get the cards in the boxes I'd put them into, and was mildly happy to see that some had stuck together. 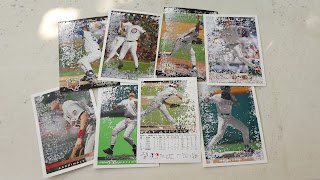 This is just a sample, I'd say about 50 cards are concerned. Ah well, it's one of the (many) downfalls of collecting cards from the 90s and of not being careful as to how I store them. I'll check my duplicates to find replacements, but I doubt there will be any, as those were my stacks of newly added 93s.

I suppose you've all been there, but people around me have started wondering what to get me for my birthday. And trust me, it's difficult enough as it is to find something for someone whose hobby is so particular, but imagine doing this AND being French. My friends have no idea what cards are, and baseball even less. And even if they did, they wouldn't know who my favorite player is (Griffey Jr). They know about the Blue Jays though, so that's a start. But it's close to impossible to surprise me with the perfect gift. My girlfriend earlier today told me that she was officially lost. That she asked my best friends, but they are clueless. Their thing is basketball, not baseball, and I've grown bored of basketball for 20 years. So I told her the perfect gift would be something signed by Griffey (and I hate giving out clues, the whole idea behind a gift is for the others to figure it out, I don't need them to do the equivalent of giving me money for something they'd just buy for me out of a list). Of course, she has no idea who that is. And then I have to explain the whole "fake signatures" part, to make sure there's a COA, and even with that, you aren't sure it's real, so buy from someone with good rep. Or a signed card. But not on a sticker. And not in a Reds uniform. How can I expect her to understand anything to the business ? When you add that she should have the card sent to my COMC address and not to France, to avoid paying $20 S&H for a single card...I might as well find it myself.

Of course, it'd be cool to find a nice signed 8x10, or something from Topps vault or a signed helmet by Bo Jackson, but this will never happen unless I make the purchase myself. And it's fine like that, I'm the only one to blame.

I just hope nobody buys me any ties. I'd have to ask them to leave their BBQ'd hamburger and the party on the spot.

Some packs of 2016 Stadium Club

Yeah, I know, I'm late to the party (always am), but I finally got my hands on some 2016 Stadium Club. boxes are a little too expensive for my taste (especially considering the hits you get, despite the amazing base cards), so I went for some hanger boxes that were on sale on Dave and Adam's. Better yet, they sent 3 instead of 2, so yay, that's 24 packs for $30 ! 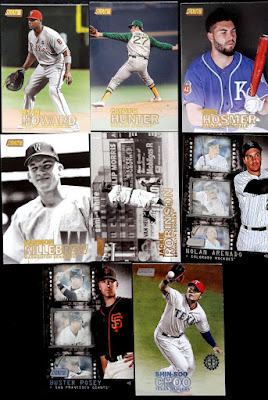 your usual parallels and inserts 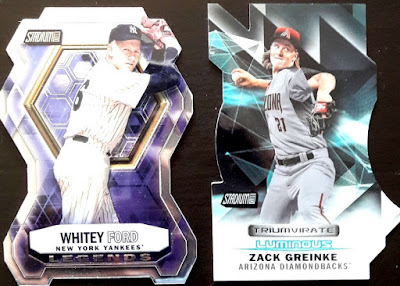 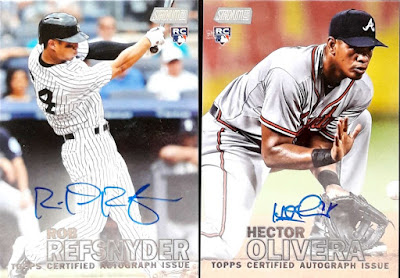 I was lucky enough to get a couple autos. I knew of Olivera because of his suspension for domestic violence (he's no longer in MLB), but I had to research Refsnyder. Apparently he's a pretty good Yankees prospect. They seem to be having a few of those around lately... 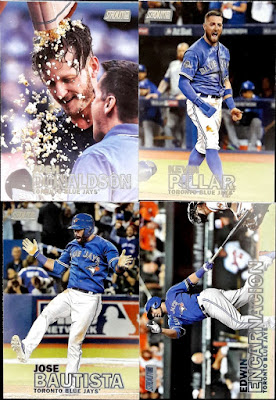 Some Blue Jays I needed. All pretty cool, even though it looks like Bautista is performing on Broadway. 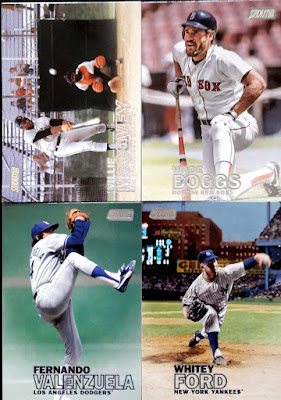 I love how they dig out great photos of past legends 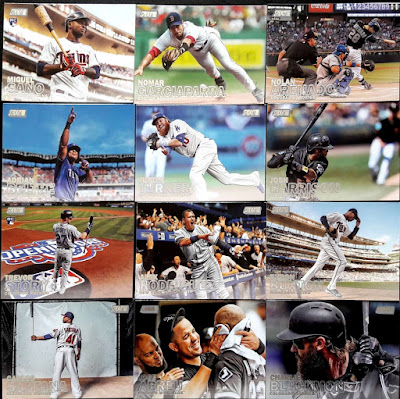 Some of my favorite horizontals. 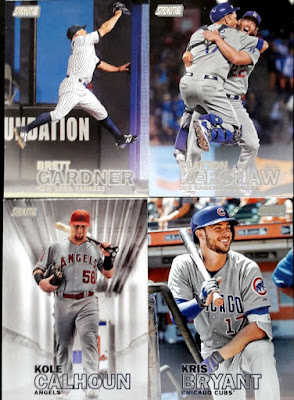 so There you go, nothing very fancy, but it's an amazing set nonetheless. I'll probably keep on picking up packs if I see some at a reasonable price.
Posted by Kevin Papoy at 7:57 AM 4 comments: