Like many of you (we wouldn't collect cardboard otherwise), I'm very attached to objects. They remind me of my teenage years and bring back a ton of great memories. Don't get me wrong, I don't make a habit of living in the past (I love my present too much), b ut they're a good reminder of where I come from and what my obsessions have been.

I've lived in France my entire life (save for a year in Mexico when I was 5 and a year in New York when I was 11), which didn't make being a fan of American sports very easy in the 90s. Team apparel was outrageously expensive when you could find it, for example, and I feel like I've given my ample share of engrossing huge companies enough as it is.

In 1993, during a trip to Cleveland, I brought back a ton of stuff. As much as a couple of hundred dollars allowance could buy me, that is, my priority being baseball cards (those Jordans could wait). There was a Cleveland Cavs clock that I still have, and a Blue Jays mug. I love that mug. I consider it my lucky mug, although it' s never brought a World Series championship to Toronto since. I'll drink most of my coffees in it, and ALL of them when the Blue Jays are playing (you never know) and I'm watching the game.

But after 23 years, the colors have completely faded and you can hardly make out the logo. A mug is a mug, it doesn't really matter, but time took its toll, and when looking on ebay, I couldn't find a mug that felt good enough to replace it with. You don't replace an old friend just like that.

This morning, my girlfriend surprised me with the exact same mug. Brand new. It's the exact same model (the bar-code is the same), and I'm so used to seeing it all faded and almost blank that I'd forgotten how bright that blue was. It's the best gift ever. One that revives memories and gives the illusion that time hasn't been a factor after all.

I'm definitely ready for the season to begin ! 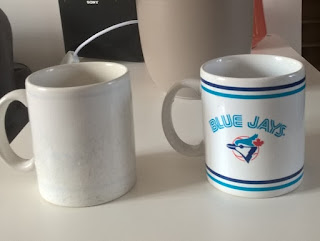 Richard, of collecting Blue Jays (among others) is my official supplier of Blue Jays oddballs and semi-vintage mustaches (semi, since the Blue Jays' first season was in 1977...). He surprised me yet again by testing the postal service's efficiency (5 days this time) and sending out cards off my wantlist, knocking off a bunch of set needs. 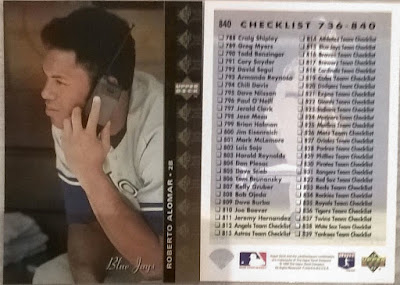 Gotta love those early SPs...I can't imagine how that's possible, but that Alomar 93 UD checklist has been eluding me for 24 years. I don't know if it was worth the wait, but that's one less 93 UD on my list ! I'm now missing about 40 of the base cards. Getting closer to completion ! 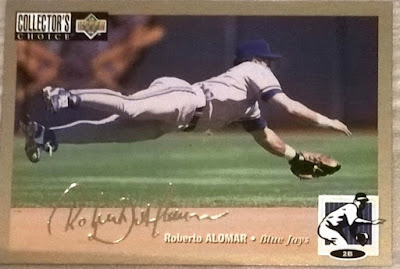 Richard is trying to put together the entire 94 CC signatures parallels. Gold and silver. I really understand the appeal, it's one of the best parallels ever thought up. He told me he pulled that Alomar from a pack. All I ever pull are Giants and Dodgers gold signatures...I need to at least complete the team set, I only have a couple of those gold signatures. 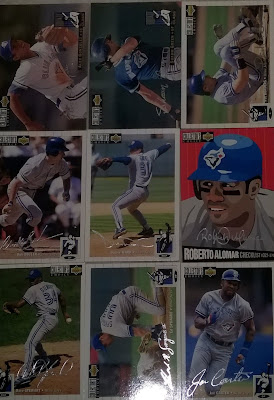 And just like that, I'm now only missing one Silver signature for the complete team set. Woohooo ! Very happy to land that Carter, too. Those bring back a ton of great memories from what it was like to collect in the 90s. 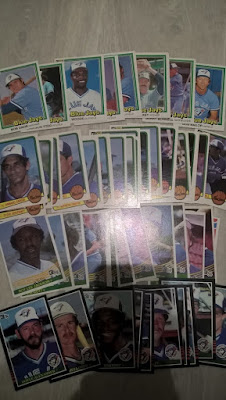 Finally, Richard included a lot (and I mean a lot) of Donruss set needs (most of my needs, actually). The quality of the photo is terrible, and I apologize, but I absolutely love that 84 design. Panini should take a closer look at those early designs !

Thanks a lot Richard ! It'll probably take some research for me to find some cards to send in return, but I'll find a way !
Posted by Kevin Papoy at 12:34 PM 3 comments:

I poo poo on your Juju (don't worry, just the name of a music album)

Julie is great, I think we can all agree on that. And I'm not saying this just because she has the same sense of humor I do, nor because she always sends the most amazing packages filled with surprises. Ok, maybe those facts help a little. But she also has one of the most enjoyable blogs to read, and that's saying a lot considering the talent out there.

So of course, I was ecstatic when Julie came back to blogging, and started to really jump up and down when a package arrived at my door a few weeks ago.

Yay.
She's back.
And this means a bunch of cards to sort out that fit perfectly my collection ! Here's a sample of what Julie sent, all cards that are new to me.

Oh, and sorry about the poor scanning job, I'm still using my phone, and the results aren't always great...but then again, I'm pretty sure you know what cards look like irl.

Impossible not to love minis. Especially parallel minis, as is the case with the last one on the bottom right 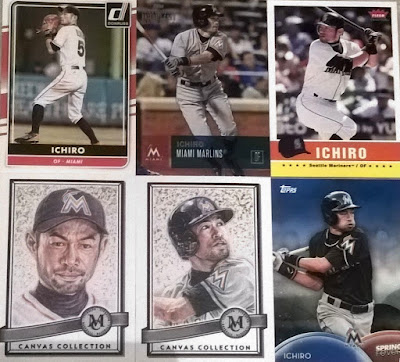 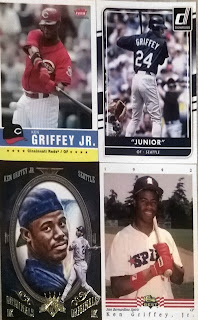 I'm missing a bunch, obviously, but it's not that easy to find a Griffey I don't have. So 4 new ones is a great score ! That Classic card is one of those cards that have been on my mental wantlist for 20 years and that I'd forgotten about. 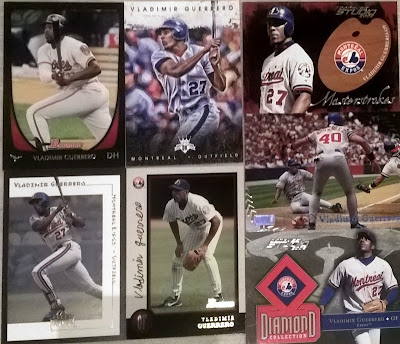 Just like Baerga, Vlad is one of those players I don't officially collect but am always happy to add cards of. Which actually probably means I collect them...

Them I officially collect ! Great looking card of Bo, btw. 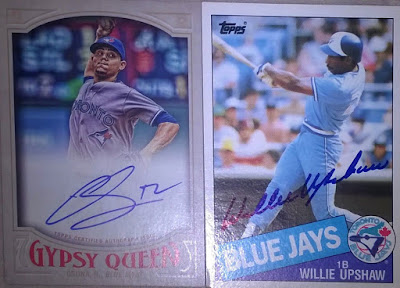 A couple of Blue Jays autos, including an IP one (or TTM, I have no idea !) 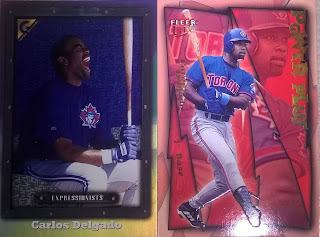 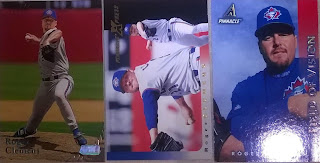 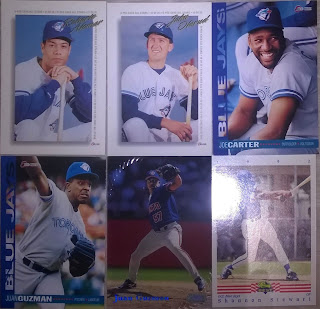 Speaking of 90s...those O Pee Chee portraits sure are something. Maybe they should've stuck to Topps... 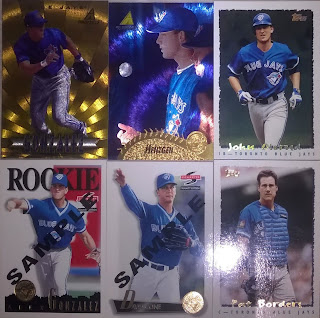 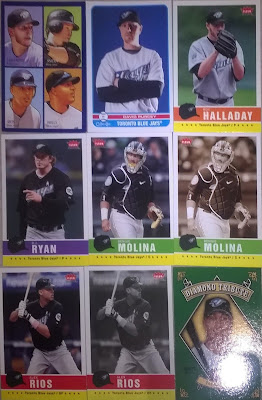 Like many, here's the grayer area of my collection : 2000-2010, including an insane amount of parallel cards. And a very bad Toronto team...(except for Doc, obviously) 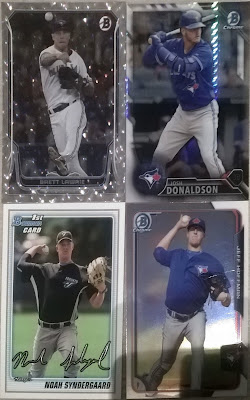 Some shiny Bowmans ! I think the Donaldson may be a refractor or something, I need to research that. Thor played a couple of seasons in Toronto's farm system before being included in the trade that brought RA Dickey...not sure about that move... 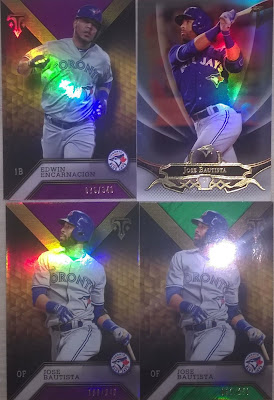 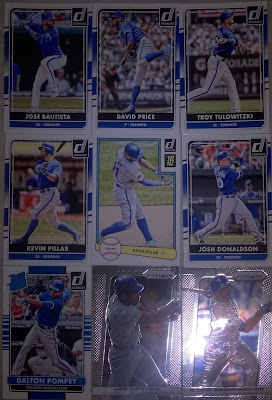 I have to admit : the more I see Panini products, the more I come to like them. Except for Prizm and Donruss, of course...Still need them, though ! 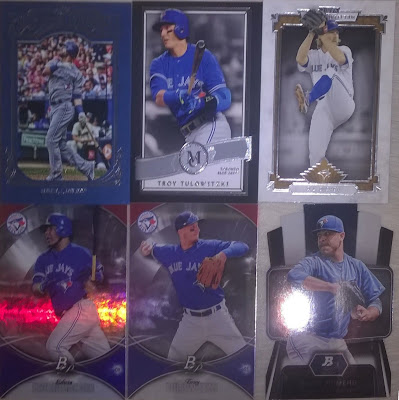 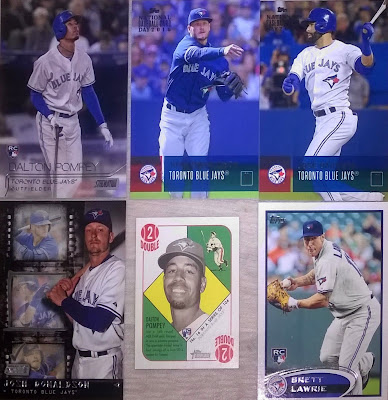 Gotta love SC, and they did a nice job with those National Baseball card day cards. They have a 90s feel to them design wise. Alongside something Upper Deck could've come up with. Before seeing that Lawrie card, I had no idea he had a variation in that set (he has 3, actually). Variation cards annoy me...

A big thank you to you, Julie, and also for the wacky cards packs you sent (and for the T shirt). Your packages always bring a huge smile this side of the Atlantic !
Posted by Kevin Papoy at 2:14 PM 4 comments:

All the news that's fit to print(ing plate)

pfew, I'm finally all moved in. We ended up moving under rain and snow, but all in all, it went well, and, most important of all, no cards were lost in the process ! I'll now try and be more consistent in my blogging and organize the trade packages I receive a little better.

That said, Brian sent me a bunch of very cool 90s cards a few months back that I meant to show, but they kinda got lost in a 300 card box, and I just can't seem to remember which was which. I'm awfully sorry (especially considering how much I love showing off 90s cards and trades in general), but I'll only be showing one card that particularly stood out. Brian actually pulled it from a pack (oldschool style !), and that makes it even more special ! 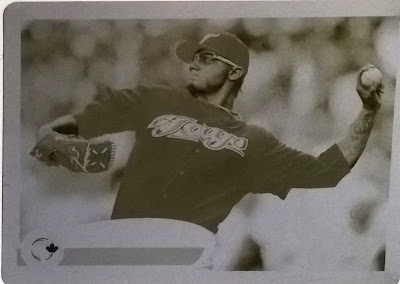 Tadah ! Brett Cecil yellow printing plate. Can't get much better. I used to pest against one of ones 20 years ago, but now that they're affordable and that there are plenty out there, I find them incredibly cool. I'm just very glad I'm not a super collector, those must drive them crazy. But printing plates make for great trade bait and are always fun to pull from packs.

I'll  now prepare mentally for the new season ahead by watching utterly meaningless spring training baseball (well, unless you're curious to see Tebow play, that is).
Posted by Kevin Papoy at 2:57 PM 4 comments: