Mark has been sending packages all over the US and more lately, spreading vintage joy throughout the cardosphere © . But not only. Because I've received several generous trade packages from Mark, and not one resembles the other. This one proves it once again ! 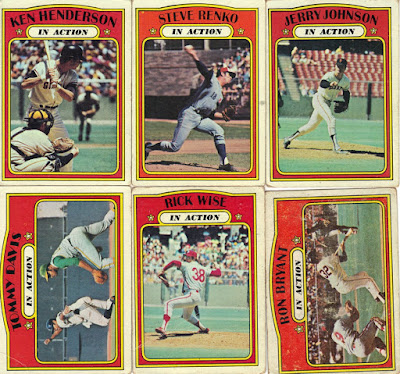 Mark knows how much I love those In action 72 cards. And he sure delivered

More 72s ! Nice Catfish and McCovey in there

All the following are much needed additions to my collection, and all new to me : 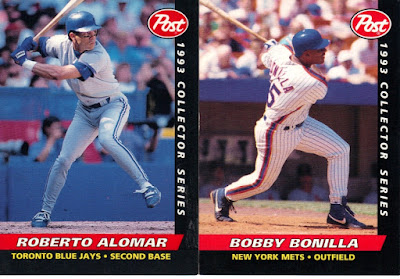 Oddballs ! I was a big Bobby Bonilla fan 23 years ago. Mainly because I liked the Mets and needed someone to collect. 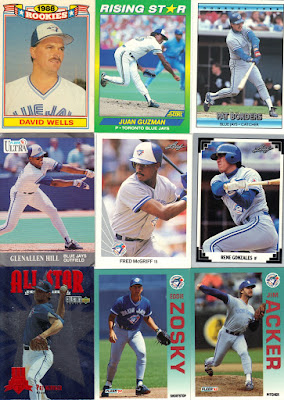 I'm extremely happy to add that Mc Griff card ! 90s gems...(well ok, 92 Fleer and 92 Donruss aren't exactly gems, but let me deal with nostalgia the way I feel like) 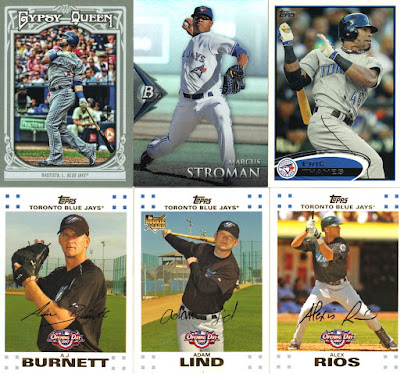 And finally, more modern cards. Weird that I haden't already received that Bautista in a trade !


Thanks a lot Mark, I already have some Red Sox and Celtics put aside for you !

It's my turn (yay) to show off what I got in our Transatlantic triple break. Brian went with 2006 Ovation and 2011 Lineage. I had some teams, they had the others, blablabla. And even though Brian had already sent me an envelope a few days before, he went back to the post office to ship those out ASAP (thank you btw the USPS for increasing by 20% international rates. Really. But there is a way around it by asking for the cheapest option possible. It exists ! Probably called Economy, or something). 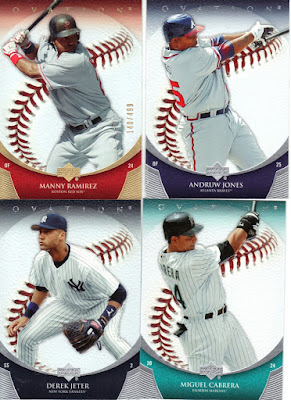 Nothing too exciting about the photos, naturally, but the embossed feel is pretty cool. I had no idea there were parallels (the Manny is a gold parallel numbered to 499). 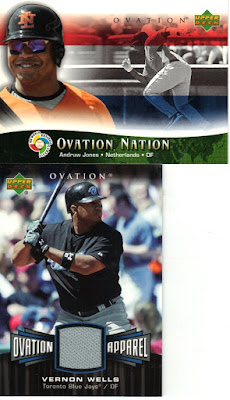 It's always really cool to get some PC inserts in our breaks. Another jersey so-called relic, but I don't care, it's Vernon Wells AND I like the card (but yeah, they really need to look for new ideas now, they've been doing this for 20 years after all).

I opened myself a box of lineage sometime last year, and it really was a blast. A ton of fun inserts and a nice lineup. Too bad they didn't spend a lot of time thinking out the backs of the cards though. 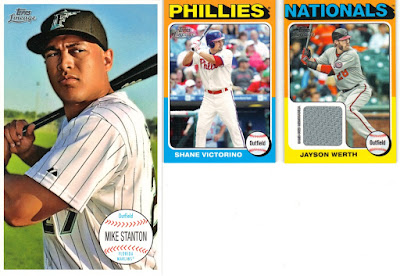 A giant box topper and some minis ! Probably from the same jersey than the Vernon Wells one... 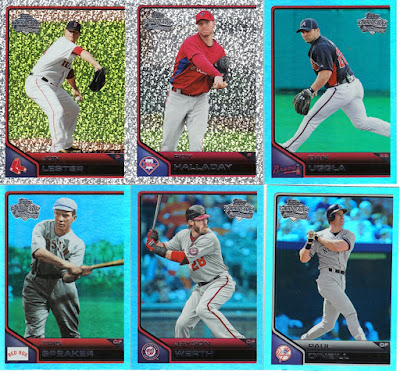 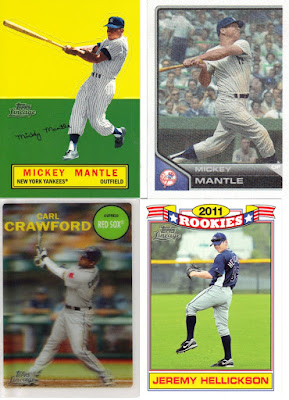 The Mick ! the one on the right has a cloth like feel to it, it's really nice. And more inserts.

Brian even managed to find some Blue Jays (woohoo, press proof !)  and a great Ichiro to add to his package 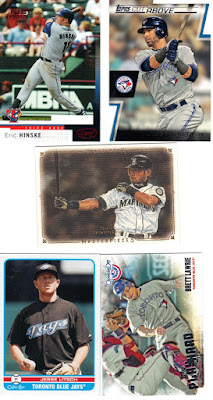 Thanks a lot Brian, always fun to be a part of those breaks !
Posted by Kevin Papoy at 2:10 PM 5 comments:

I'm still not sure how it all works, but I'm honored to be part of the Supertraders group put together by Wes. Most people from the group are actually my usual trading partners, so it makes it easier for everything to go smoothly. Plus, it's a great way to find new people to trade with (I'm actually pretty sure that was the whole point. A trading accelerator).
I've actually already received cards thanks to the initiative. I know there are some waiting for me from Wes (my good friend  Matt from Bob Walk the Plank is nice enough to serve as a post office platform), and I also got two envelopes. One from Tony (Off hiatus) and one from Brian (highly subjective). So yay !

Let's first have a look at what Tony was nice enough to send my way : 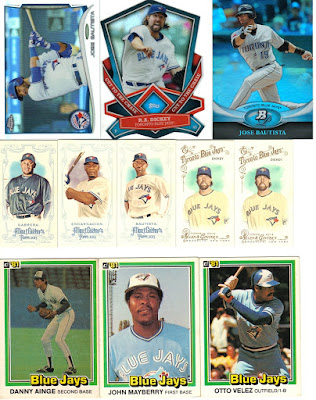 Plenty of minis, some with A&G backs. Can't go wrong with 81 Donruss, especially with Danny Ainge on it. 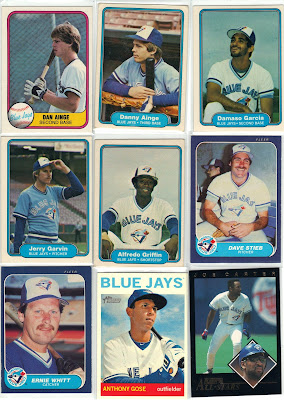 More early 80s stuff, some Heritage and a very nice Carter insert (ah, 90s....). Thanks a lot Tony, many of those will be going in my binders ! I'll make sure to put some Brewers aside, as usual.

Next up, some cards from Brian. Not for our usual trades. Not for our transatlantic triple breaks. But for #SUPERTRADERS. This here has always been one of my all time favorite cards. Maybe because at the time, an $8 card was a lot for me (I think that's what it was worth) and I had traded for it, but also because of its simple design. When I look at it 20 years later, I realize there are many more fancier Griffey cards out there, but this one's still special, as I had it in a frame for a long time in my room. 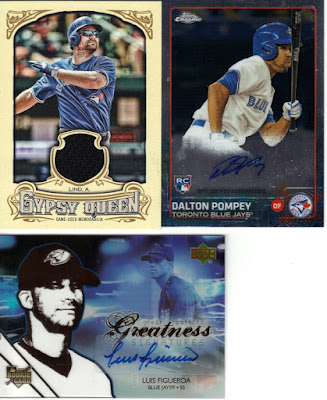 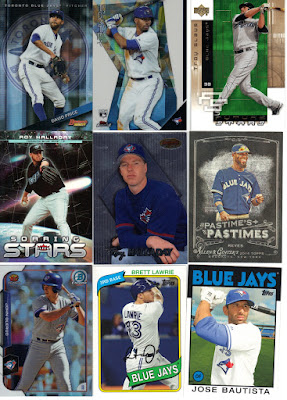 A little bit of everything. The Pompey Finest and Price Bowman's Best are my first taste of each issue from this year (well, last year now). 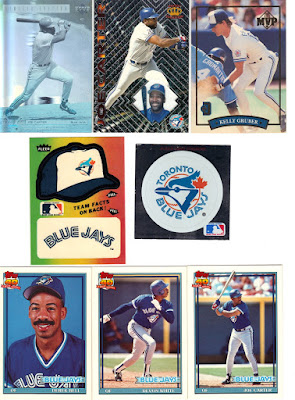 Hologram ! That Carter Pacific card is also awesome, and I've always been a big fan of those Mc Donald's MVP World series issues. Great design. Some cool stickers (first time I've seen the one on the right) and some very crisp 91 Traded. 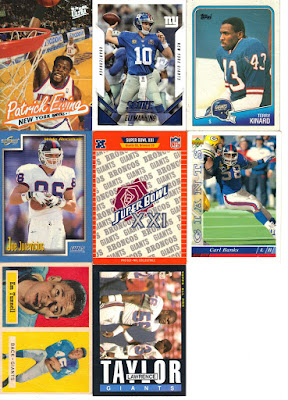 New York teams ! That Em Tunnell card is actually a 57 Topps. I'd probably be able to dwell myself in any vintage from any sport (Hockey is really cool as far as vintage goes. plenty of mustaches), but I need to try and stay focused. I really love the variety Brian sent. Lots of stuff from lots of eras. 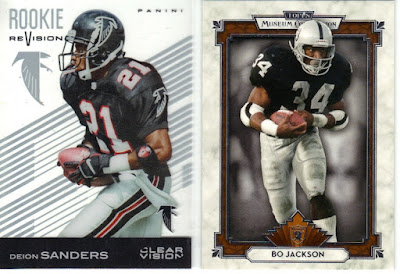 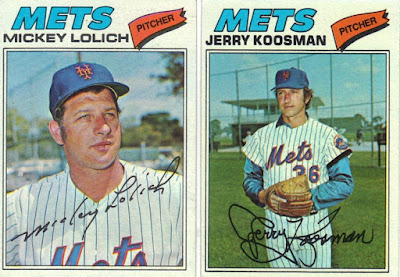 1977 Mets cards for my ever growing collection 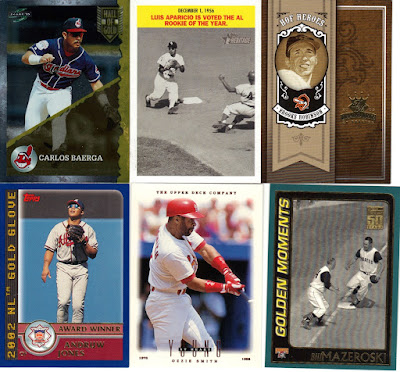 The great thing about having a large PC is that I get a ton of very various cards for each one of them. Love that Hall of gold 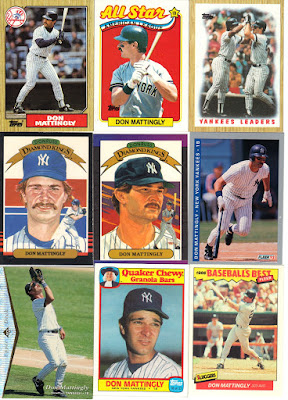 Mr Mattingly, including a very cool silver SP and some oddballs. Always weird seeing him without a mustache. 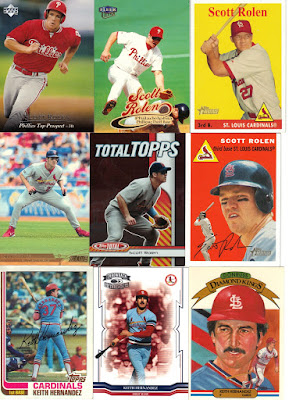 Some Pat Burrell cards (including a gold SC parallel), and some Keith Hernandez. 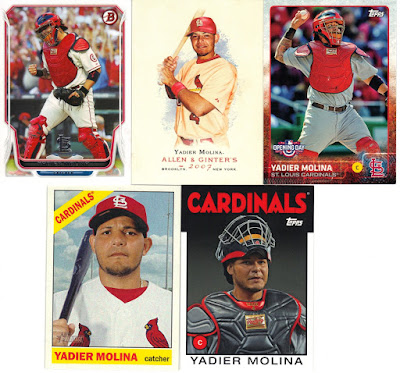 Yadier ! A&G, Heritage, Archives and flagship (well, opening day). Gives a good idea of what's been going on in the hobby for the past few years. 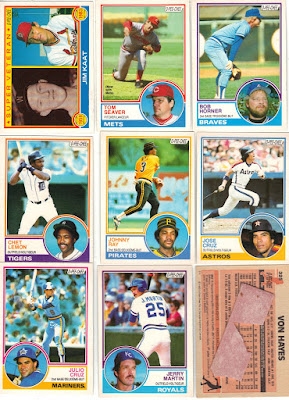 And finally, also included was a pack of 83 O PEE CHEE, that of course appeals to my Canadian roots, and that came complete with its piece of gum (I don't think even Gavin would give it a try)Jim Kaat is actually PC, so that's cool. And it was apparently a Cruz hot pack.

Thanks a lot Brian, all of those are greatly appreciated, and thanks for hitting on a bunch of my broad collecting needs !