The joys of Ebay : a Mantle (very) vintage card

Last July, I was really psyched because I'd won a 1960 Topps Mantle on Ebay at a reasonable price (around $35 shipped). I really do not care about condition, as long as it wasn't doctored or it isn't ripped. From the scan the seller provided, I could tell it was in very poor condition, with parts of the bottom of the card missing, maybe because some tape had been teared off. I could live with that and was surprised to end up with the winning bid (it usually sells for around $60 in poor condition, and they don't pop up that often). So yay, a Topps Mantle base card for me ! And one with one of my favorite designs at that.

First bad surprise, the seller sent it in a PWE to COMC. A PWE for a $35 card. A Mantle card. This doesn't make sense. Second surprise, for the first time, I received an email from COMC asking me if the condition was normal. And I've had some cards in very bad shape shipped over to COMC...I answered that indeed it was the condition as advertised.

And I received the card today.
I expected to be a little disappointed (I had seen the scan up close of the front of the card, and again, it's still cheap at $35), but what I didn't expect was to see how bad the back of the card was. It's ripped in several places and we're far from a 2x3 frame. The really bad part is that there's tape all over the front of the card, annihilating that great cardboard feel we all love. I did not want a laminated Mantle !

As always, buyer beware and I kinda knew what I was getting into, but I would've liked a better description and warning from the seller, and more photos. 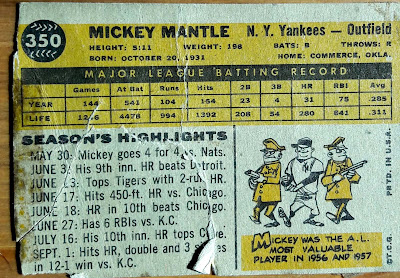 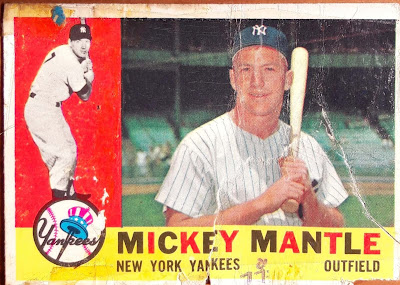 Don't worry, this post has nothing to do with OJ Simpson nor with a Seinfeld episode (that would be cool, though). It's just that I'm about to show a bunch of cards that simply hardly fit my collection. I've written about it many times : it's just that I add as many cards from one seller as possible on Ebay to lessen shipping costs. Most cards I really wanted are going to fellow bloggers, which is why I won't show them here.

Now, for some complete random cards straight from Korea (South Korea, not North, please don't unleash any fire and fury on me) 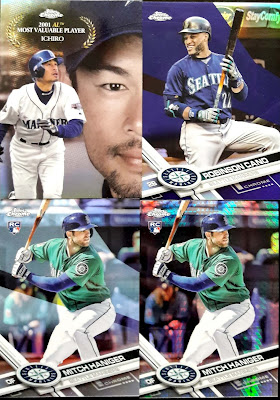 My first taste of chrome. There were 8 cards total, and they were all for $1.85, which is pretty good considering the Ichiro alone is worth at least that. The Cano is a purple refractor, though it's weird that only part of the card is purple...go figure. The Mitch Hanger at the bottom right is, I guess, a prizm refractor. Why anyone would keep using the word prizm after what Panini did with it is beyond me.

Part of a 5 relic set, with nobody I even remotely collect. Still like 2017 A&G though, so happy to have those anyway. 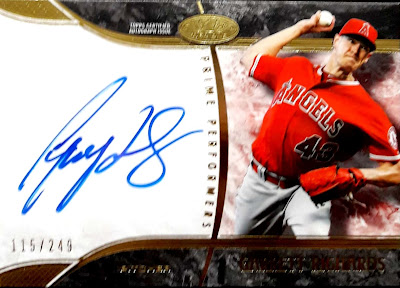 Full disclosure : I did not know who Garrett Richards is. Now I do. I still don't collect him, but it's a nice on card auto for a mere .99 cts 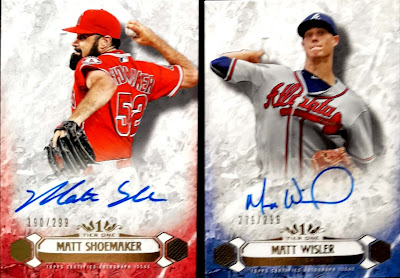 99cts also, but this time for the lot of 2 on card autos from the always enjoyable Tier One brand. I knew Shoemaker, but not Wisler.

Ok, those DO fit my collection (guess I won't be acquitted). I especially like the dual relic of Andruw Jones and Lofton, two players I like a lot. Each card was 99cts also.
Posted by Kevin Papoy at 1:13 PM 3 comments:

I'll never state enough how grateful I am that a service like justcommons exists. It really makes the life of collectors easier, especially when, like me, you enjoy commons and tend to stay away from high end cards. Turns out they had restocked on some 93 UD, so I was able to cross off my wantlist most of my needs. I don't know how I managed, but I'm still missing a few base cards (5 or 6). I need to pay better attention ! I was also able to replace those that were really damaged after spending too much time in a box in a damp environment.

While I was at it, I added a bunch (244) of Blue Jays needs from 1977-1995. Nothing very fancy, just some holes to fill, but still very much needed. Not as exciting as vintage or cards from the crazy 95-99 era, but those will be for the next shipment.

It takes a while to add all those cards to the cart, but it's just like looking in a 10ct bin from overseas. 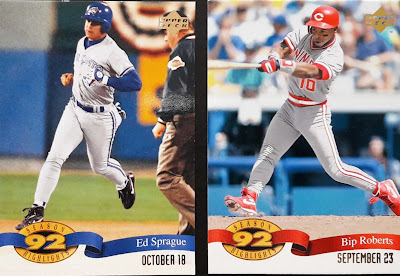 Those are far from commons, and are actually the toughest inserts to find from the 93 master set.They were only available at certain places (Upper deck heroes of baseball card shows), which didn't help. I was glad to add those 'commons' for a couple of $. 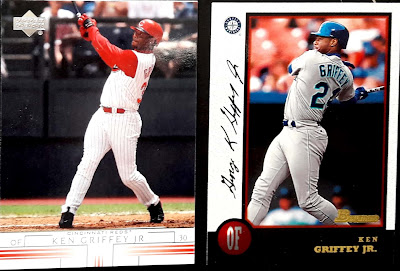 Woah, something went wrong with the scan there...ah well...I'm trying to get all of Griffey's base cards from major flagship sets. I'm missing about a dozen, they should'nt be too hard to track down (that's mainly because TJ aka the junior junkie helped me out a great deal with that project). 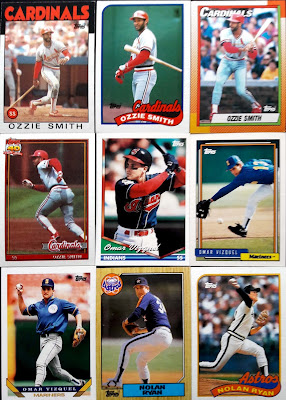 I did not remember adding those to my cart. I suppose I had a Topps craving, or my binder laying around and I looked which Topps cards I needed of Vizquel and Ozzie. The Nolan Ryans are because I'm trying to get one Topps base card from each of his playing days (the RC will be the toughie) 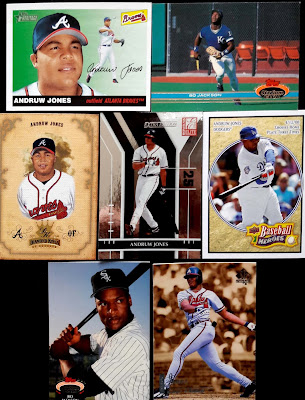 Just some random cards of Andruw and Bo, that I knew I did not have when I did a search by player name. The 91 SC is pretty cool, weird that I didn't already have it.

Now, for the Blue Jays, I'll only show the fan (and mine) favorites from those days. Those are players I've always heavily collected, which means it's not always that easy to find some I really need, besides parallels and inserts. 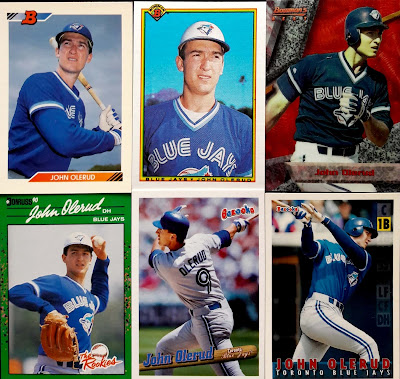 Early Bowmans are among the ugliest sets you'll come across, and that explains why I haven't added those before. I've also never bought a pack of Bazooka in my life ! 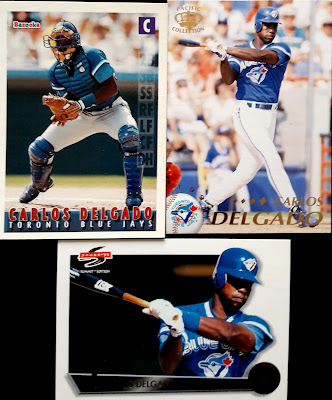 At first, I thought those 2 cards were from the same photo. But a closer look showed that the writing on the bat isn't the same. I guess Delgado just always looked the same in his stance. 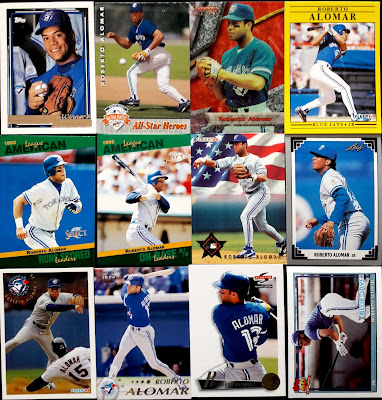 Alomar cards tend to be a little more expensive than other players, so I didn't always hurry to add him to my cart. I figured it was time to start adding some to my collection. I had to check what those Topps Gold winners were, and it's funny to learn that they are way less scarce than the normal gold parallels, even though it was a redeeming program. I really like that 94 Fleer where he puts out his own brother, and that 91 Topps traded. 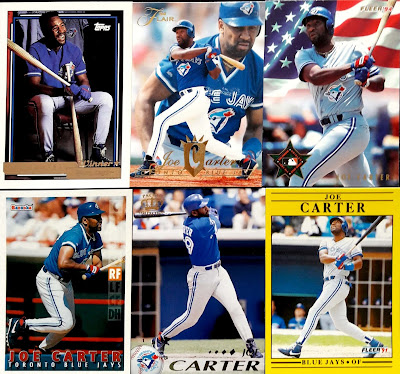 Always a treat to add some base cards of Joe Carter ! I love those 94 Fleer inserts 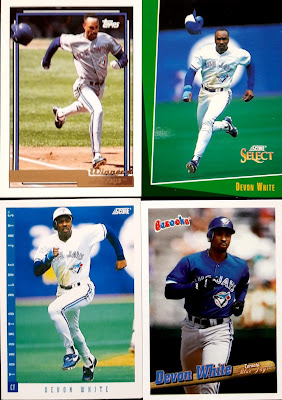 Devo ! I suppose he was always running too fast and losing his helmet... 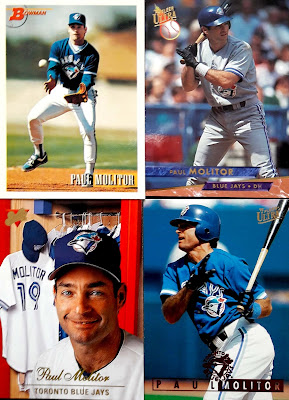 Those Studio cards from the  90s are really great. I also have a soft spot for 93 Ultra.

I love those black gold leaf parallels. Such a cool idea and execution. 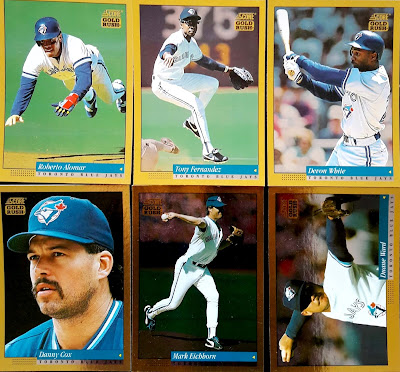 I wonder how Topps felt about those Gold rush parallels...I know I really love them. That Alomar is really weird. 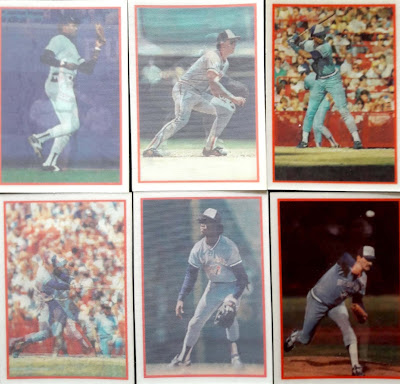 yay, Sportsflics ! It's Winfield in pinstripes that you see in that first card (and Ripken on that second), but that's because there are 3 players on one card. THREE PLAYERS ! How cool is that ? 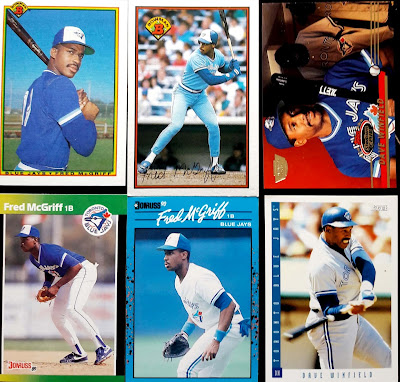 I had no idea there were so many boxed sets from Donruss and Fleer before I started getting semi-serious about my Blue Jays collection a few years back. The two Donruss Crime Dogs are from said boxed sets. The Winfield SC is a members only parallel. 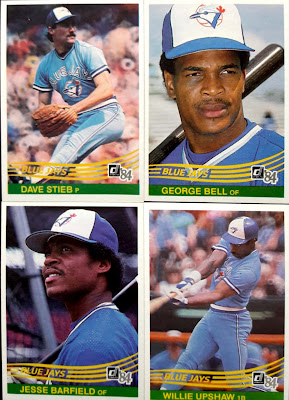 And finally, I wanted to show some 84 Donruss. Because it's always a cool design to show.

Now I need to virtually build a new stack...
Posted by Kevin Papoy at 9:34 AM 3 comments: