Today, I thought I'd mix it up a little and talk about my Jim Thorpe project.

As you may know, I signed a book deal (well, graphic novel, actually) with a major publisher in France to write about an American sports figure. I wanted to write about baseball, but they told me it was too small a market in France, so I went fishing for football ideas, and some of you directed me towards Jim Thorpe.

Let's make a long story short: his life in general and collegiate in particular is perfect for a book subject, and the project was accepted.

Basically, here's how it works:

I write the story with my own words (which is always better) after having read a ton of material on the subject. I'm not writing a biography, which means I take certain liberties with facts. Not too many, because I want the spirit of things to be right. But for example, for the sake of rythm, I put two years of school (1907 and 1908) into one. I couldn't have 2 super intendants during that span, so I put Friedman in there one year ahead. It's really just a question of continuity. But major historical dates aren't moved around (the Harvard and Army games, for example, in 1911 and 1912). It's a lot of work to find an angle that makes for an entertaining story without piling up clichés. But his relationship with Pop Warner and the anti-native american racism is golden material for what I had in mind.

Unlike a novel, I have a space constraint. I can't have more than a 90 page graphic novel. Which makes it all the more challenging rythm wise. You don't want to rush the end just because you're running out of pages. Right now, I've written 75 pages out of 90. And I still have to write about the Olympics and the Army game. Those will be the toughest 15 pages of the album to write ! Which explains why I've been procrastinating for 3 months (also because the artist in charge of drawing the album is extremely slow)

Anyway, here's the process: there's someone (his name is Michalak) who draws a storyboard after making sense of what I wrote. He uses the dialogues, but besides that, he's free to interpret any way he wants. He's the eye of the camera and choses the angles, the staging. I just give directions, saying where the page should end ideally, but that's it. Some writers will tell the artist what's in each panel, each box, but not me. I'm really not good at visualizing things ! 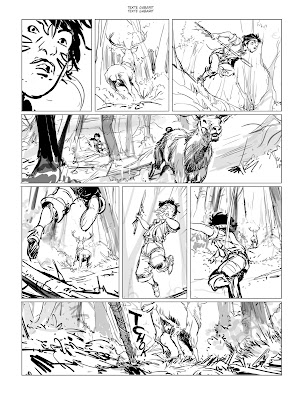 This is page number 2. Michalak is usually able to draw one storyboard per day. Usually, storyboards have way less details. But he's a little crazy. We go back and forth to make sure we get the scene right, and once it's final, we send it to the artist.

Another artist (her name is Jeanne Chapelle) then inks those pages. 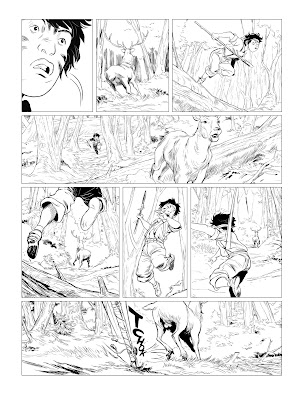 This should take a day or two, but the process is a bit longer with her. But hey, as long as the result is great, we can wait a little... 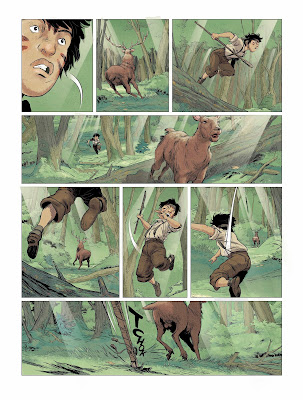 Finally, there's Melissa who adds color. It's always a delicate part of the story. You don't want the colors to be too dark, or not subtle enough. I really love what she's done. 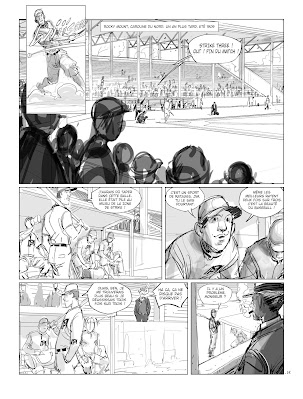 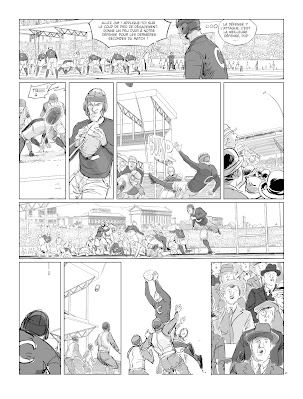 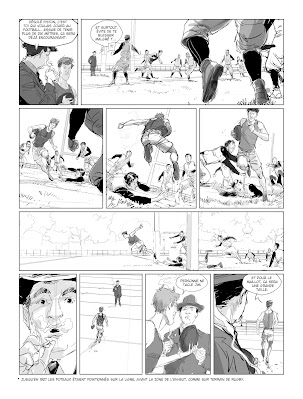 There, now you know everything !

It's a lot of work, but it's also a lot of fun, and it's amazing to work with very talented people (the one helping me write is one of the best comic book writers of the past 20 years). I'm really hoping for a 2022 release. And who knows, maybe it'll be picked up by an American publisher so you can understand what's in those bubbles !