Things have been complicated between France and Italy because of sports...soccer, to be precise. We beat them in the World Cup in 98, then in the European Cup finals in 2 000, they beat us in the World Cup Finals in 2006...lots of bad blood ! (aaaah, the joys of sports having an impact on people in the real world. You're supposed to root for a team, not hate the people who root for the others)

Riccardo, from Italian Completist, reached out because we hadn't traded in a while, and because fellow Europeans should stick together when it comes to card collecting ! His approach to collecting is very similar to mine : we just like accumulating cards, maybe because they're so difficult to get here at a decent price, which makes even the slightest 88 Donruss pack enjoyable to rip.

Needless to say, it's always a treat for me to be able to sort that kind of thoughtful box. It cost him $15 to send it accross the border. It would've been 4 times that for an American. That of course is part of the problem for us, but I've been rambling long enough about that for the past 5 years. 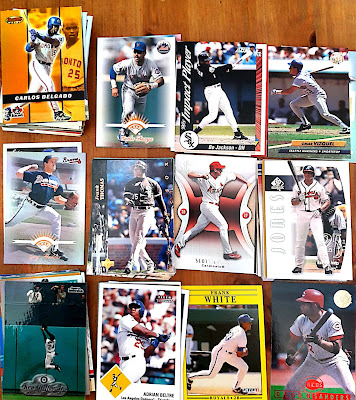 The photos don't really do this lot justice, but I simply couldn't scan everything ! Plenty of PC here, with a healthy stack of Blue Jays. That SI Griffey is one of my favorite base cards of his. 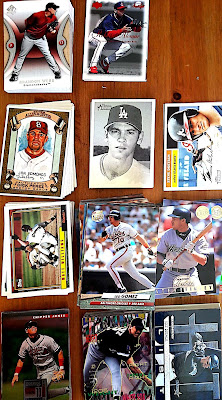 My collection really revolves around Upper Deck. Those are the base sets I've been pursuing the most. So it's nice to add some other brands from my beloved 90s . Most early Bowman and Topps Heritage for example are completely absent from my collection, except for some Blue Jays cards. SO it's always nice to see some new ones. 2007 A&G for example was pretty cool. Riccardo must've scored a lot of Ultra Gold medaillions, as he sent me a nice stack of doubles. 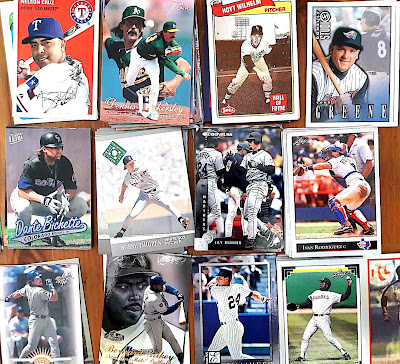 More Ultra, some Flair, some Leaf (I've always had a soft spot for Leaf) and even a dozen awesome oddballs !

Thanks a lot Riccardo, it's a great idea you had getting that European connexion going full swing. It helps remind us that even though it's not that simple (well it is, but you just need to overpay) to collect from overseas, the blogging community knows no boundaries and there's generosity everywhere.
Posted by Kevin Papoy at 5:49 AM