I'll be Judge and jury for that transatlantic triple break

It was Matt's turn to chose a box for our box break, and after much debate with himself, he picked a box of Panini Chronicles. The card Gods were with me this time especially, as I ended up with the box's 4 guaranteed hits. I actually felt kinda bad about it, I prefer when our boxes are more balanced, but ah well, still nice to be lucky and I know my friends don't mind the least ! 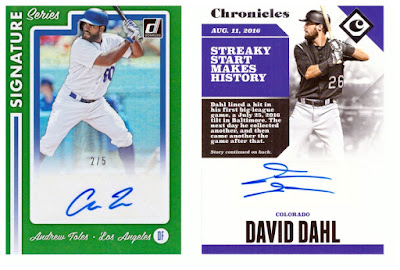 I'm pretty sure I already ot a David Dahl auto in one of our previous breaks. I have no idea who Andrew Toles is, but it's a very low numbered auto of a major franchise, so that always makes good trade bait !

I wasn't impressed with the base cards (and even less with their gold parallels), but as I looked at them closer, they grew on me. Why not, after all, at least some thought went into those cards. 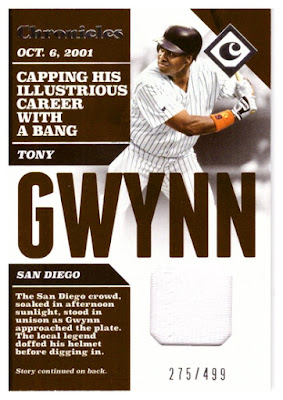 Here's the third hit of the box : a (ok, boring, but still) swatch of Mister Tony Gwynn. Always a cool addition.

And finally, the kind of pull we always hope for in a box break but hardly ever happens. Matt jokingly wrote in the email presenting the box he picked that he hoped there would be 4 Aaron Judge autos. There was one. We'll take it ! It's a sticker auto on a Panini product, so it won't reach amazing heights in terms of value, but you can hardly dream of a better pull, and it's all mine, MINE ! Well, if they do send the card to me one day, but I don't think that will be a problem. 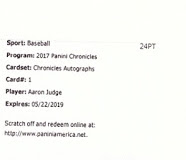 The package Matt sent me was also loaded with a few more blasts that he always so carefully choses, thanks to his great knowledge of sports and of everybody's collecting needs : 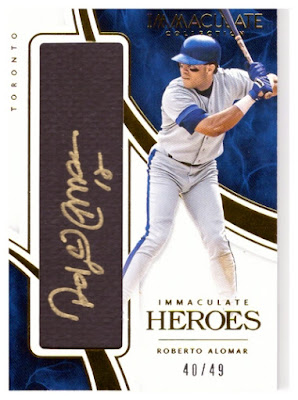 Sometimes, I think Matt can perfectly read my mind. Alomar was at the very top of my list of desired autos, and eventhough there are quite a few available now (maybe he needs the money...), I never actually pulled the trigger because they were all out of my price range, or I'd always lose the betting on ebay. It's a gorgeous card with an amazing on card auto. I love it ! 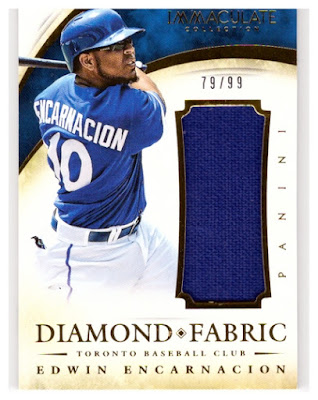 More from Immaculate, this time with a very nice Encarnacion swatch. 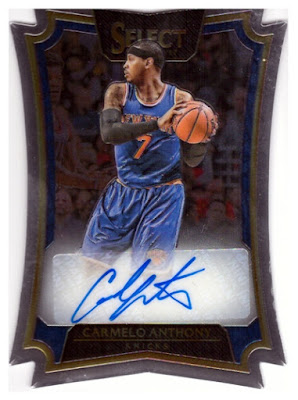 And finally, I never ever thought I'd receive a Carmelo auto in a trade with my baseball budies one day, and yet there it is ! I wasn't exactly sad to see him leave New York for OKC, but he's still a major NY player from the past (ugly) years and a major addition to my collection.

thanks a lot Matt for the break (wooohoooo, Judge auto !!!) and for the incredible extras !
Posted by Kevin Papoy at 4:22 AM