In Company (Flow) of 97 inserts

So here I am again, a day after receiving my new COMC package filled with inserts from the 90s. This time, I picked 1997 (I'm a simple guy with simple methods). There are a lot of inserts I never saw in person or didn't even know of, mainly because living in France in the 90s made it difficult to collect (obviously), despite my Beckett subscription filled with people wondering how much their cards are worth (hint : not much now). But also because I mostly collect Blue Jays cards, so if a Blue Jays player wasn't included in that set, chances are I never saw it.

The mid-90s were an awesome time for Hip hop (the type of music I was heavily into back then. Still am, actually), that many call the Silver age (or the true golden age, depending on how you see it), and it included albums such as Company Flow's Funcrusher Plus (yeah I know, I'm boring you, but I just wanted to explain my title !). And I'm wondering if 1997 wasn't also the turning point for baseball cards. There was Leaf Signatures the year before, but Uper Deck changed everything with their game jerseys, and just by looking at the inserts I receive, I can tell that that was a veery, very strange year for collectors. I wonder how much packs sold at on average ? In 1994, there were $7 packs (Finest or Flair) and that was unheard of. Who was collecting back then, do you remember ? If I had to guess, I'd go with 3$ to $4 for a normal pack of something like Upper Deck. It must have been absolutely impossible to keep track and keep up with the production.

But man are those cards fun to get 20 years later ! I'd prefer the thrill of finding them in packs (especially at 1:144 or 1:72 odds), but ah well, receiving them in my mailbox after only a $5 shipping fee is fine also. 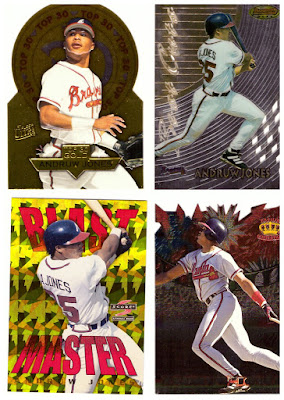 Those cards don't really scan well, bur they're all shiny and new ! I'm pretty sure the Blast Master can hypnotize you. What I love about all those inserts is that every manufacturer was game. 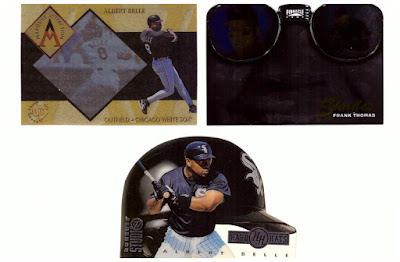 You can't make those up...the UD3 Marquee Attraction is really beautiful. And it still cost me close to $3 today, which is a lot for me to put in a single card that's not vintage.

Die-cut acetate at its best ! The HR King is actually quite shiny also, and transparent (it's not white at all). FOr the Hall or Nothing, I had to get the cheapest guy, and as it often turns out, it's either Belle or Vaughn. 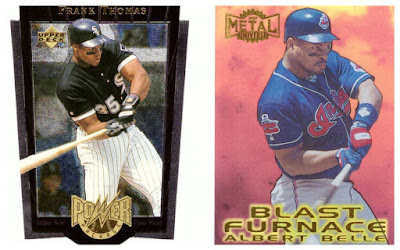 The texture on that Blast Furnace is also really interesting. It's all soft and transparent.

This is just crazy...oddly enough, the Claim to fame (it's from 1996, I realize now...oops) is the most sought after although it looks a little cheap today. That Matt Williams card is incredible

I ws too lazy to scan the front of that Big Hurt Passport to the majors card, and the Rolen is a fun pull out (I wonder if Rolen's actually ever been called a fun pull out by anyone before)

So there you go, just a sample of the inserts I got ! The rest (about 40 others) were more your usual run of the mill kind of cards.